Kyline Alcantara celebrates her birthday with a solo concert 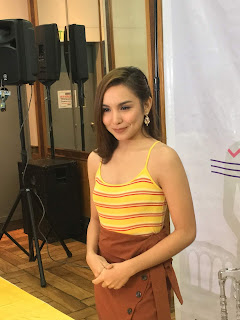 GMA Artist Centre star Kyline Alcantara marks another milestone in her career as she celebrates her 16th birthday with her first major concert dubbed as 'Kyline TAKE FL16HT' at the SM Skydome on September 8.

The young Kapuso performer is also set to launch her single "Fake Love" on the same day, under her first self-entitled album from GMA Records. The album 'KYLINE' which contains 6 songs and minus one versions of them, will be released on September 18 via iTunes, Spotify and over 180 digital stores worldwide. Pre-selling of "Fake Love" on iTunes begins on Sept. 1while pre-selling for "Kyline" the album begins on Sept. 8.

Kyline expressed her excitement for her latest feat and thanked her fans, whom she calls her " Sunflowers " for their unwavering support.


The fresh-faced Kapuso artist, who is turning 16 on September 3, is most notable for her multifaced performance in the hit GMA primetime series Kambal Karibal as Cheska/Crisel.

The concert produced by GMA Records and CCC Productions will showcase Kyline's singing prowess through the stage direction of Marvin Caldito, musical direction of Soc Mina. Tickets are on sale via SMTickets.com and priced at P2,250 for Platinum ( with free album and group photo with Kyline ) and P1,360 for Gold.

Watch Kyline Alcantara's full interview and her cover of " Sundo " at our Youtube Channel: https://www.youtube.com/channel/UCChDDXwTsKd0WVn8PUkcFaQ